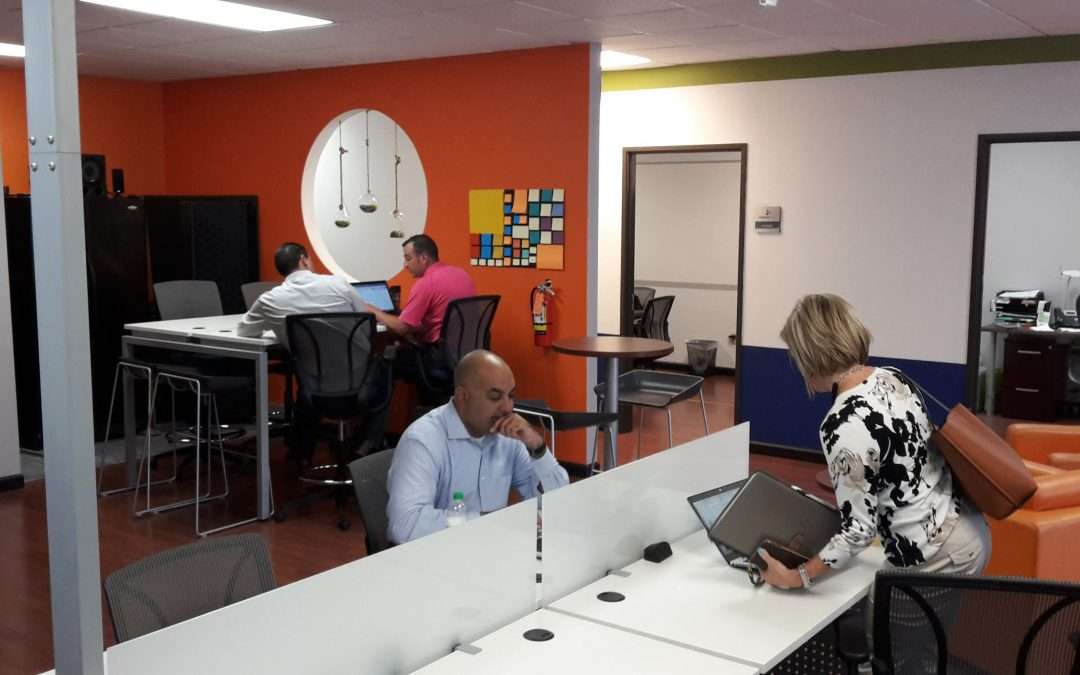 In light of the new Yardi Matrix report on shared space disrupting the traditional office, let’s take a dive into how corporate Co-working Space specifically is redefining the office culture.
Since we know niche spaces are growing, the narrowing of the field in the shared space industry would seem to be the trend. However, the scope is truly broadening, as massive corporations continue to dive head first into the Co-working Space world.

The Start of Corporate Co-working Space

In 2016, Microsoft became the first to publicly introduce the concept, when they announced they would have staff working from WeWork locations in several cities. Now, WeWork boasts clients from all over the Forbes 500 list. HSBC, Salesforce, Facebook, IBM, Bank of America are among the many corporations who are ‘enterprise partners’ of WeWork.
Defined as companies with over 1,000 employees, enterprise clients now make up over 25% of WeWork’s annual revenue.  And its not just WeWork. UK flexible workspace marketplace, Hubble, has had huge corporations approach them for several different purposes. Some want to use Coworking space for a specific branch of their company, others may want to set up some sort of innovation lab. Companies such as EY, Shell, and Jaguar Land Rover are among those who have partnered with Hubble.

The word ‘flexible’ is probably last in line of ways to describe traditional corporate office structure. Being that flexibility is one of the most sought-after benefits of Co-working Space, it stands to reason it is an attraction for the new corporate wave in shared spaces.
Aside from actually employing their staff in a Co-working Space, there are several other ways in which Co-working Space is changing the way traditional offices operate.
Companies are turning to open floor concepts and non assigned seating, concepts brought to the forefront in shared spaces. Companies with a large number of remote employees could bring them together periodically for collaboration sessions in  conference room style space, whether at a Co-working Space location, or a traditional office. Startups could combine to use a traditional office space that would have otherwise been too large or expensive for only one of them.
All these ideas and popular concepts are born from the success of the Co-working Space style models, and more companies are introducing them, whether they’re based out of a standard office or otherwise.

Creating Their Own Spaces

We mentioned this trend recently, in which companies are actually starting to create their own Co-working spaces.
Open House style spaces are built as somewhat of a public amenity. Automotive brand MINI uses a space of this nature in Brooklyn. Their goal is to further design concepts from local creative minds, not necessarily to sell cars.
Campsite style spaces are typically invitation-only locations, where collaboration occurs with members of different teams. Silicon Valley is starting to see an influx of these spaces.
And for the most part, results have been very positive in meeting goals of innovation, transformation, and future-proofing.

Collaboration, like flexibility, are at the core of why many freelancers, remote workers, and startups choose Co-working Space to begin with. But corporate clients are realizing this is similar to what they’d like to achieve with their own employees. Collaboration has been described as a healthy side effect to Co-working Space.
Companies who have their employees working out of Co-working Spaces are building organic partnerships and launching new ideas and projects. Traditional cubicle set ups and closed offices are deterrents for innovation. Employees often report boredom, and feeling like their thoughts and creativity become stale. Corporations, regardless of size, are benefiting from the increased teamwork, visibility, and connections that come from shared spaces.